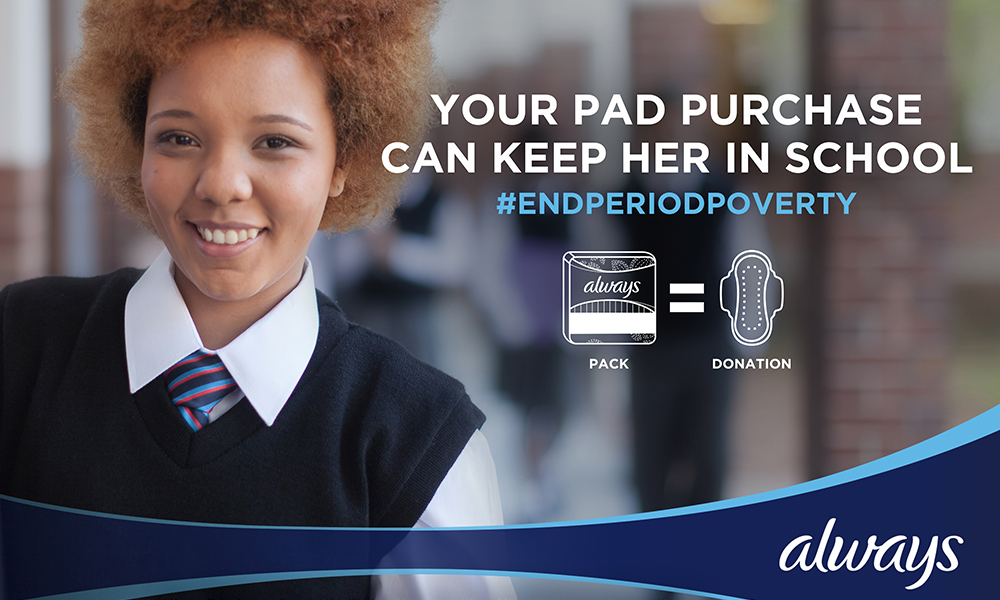 ALWAYS believes every girl should have access to sanitary protection #EndPeriodPoverty

We already knew that menstruation was the reason why girls in Africa did not go to school three to seven days a month. Countries such as Uganda or Kenya had already established that as a problem which undermined girls’ school success and the consequent lack of opportunities for women. However, obscurantism or lack of information have little to do with these school faults in the UK – it is mainly due to the lack of economic resources.

According to The Guardian, “In March, the media were full of reports of schoolgirls in Leeds routinely missing school because they were unable to afford menstrual products. Children as young as 10 were choosing to stay at home to avoid the embarrassment of bleeding on their school uniform in front of their peers, because they weren’t adequately protected. They miss school every month because they cannot face the shame and fear of going to school using socks stuffed with tissues, old torn T-shirts or newspaper. In these families, menstrual products are an unattainable luxury.”

These reports showed how low-income households constantly have to choose between buying food or hygiene products on a daily basis. Maria Garcia, a single mother of two, shares her struggles: “Sometimes the girls ask me if they can stay home because they don’t want to go through the embarrassment of leaving stains on their clothes. We are lucky that we’re able to buy pads and basic hygiene products, but sometimes it’s not enough, the stigma around a girl bleeding every month is still a big deal for young kids in school.”

The Government’s absenteeism and lack of response have already given rise to a new campaign: #FreePeriods. The matter was brought to the British Parliament in March 2017 and a petition is circulating on the internet for the government to provide free menstrual products to children in receipt of free school meals.

Niamh Fowler, a local teacher, said: “I think it would be great if the campaign could end the taboo. If girls don’t feel comfortable talking about their own periods, they certainly won’t be comfortable asking for help.”
Always, a brand of female hygiene products which has been funding charities and not-for-profit organisations over the years, recently started their own campaign to fight against period poverty. According to Always, more than 137,700 girls in the United Kingdom can’t go to school when on their periods because they can’t afford basic sanitary products such as pads or tampons.

If you want to help keep girls in schools, for every pack of Always Ultra sold from March 8 to April 30, the brand will donate one pad per pack directly to UK school girls who can’t afford sanitary products. You can also help by signing and sharing the petition, or simply share a “throwback” picture of yourself using the hashtags #EndPeriodPoverty and tagging @always_uk_ireland.