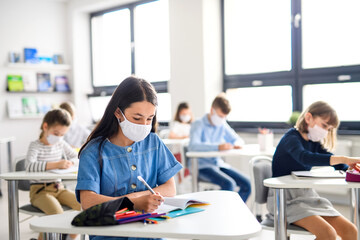 Return To The Schools

Students went back to school on Monday 8th March after the Christmas holiday and the nationwide lockdown which was announced on the 4th of January. Students will return to schools in staggered year groups with mass testing being conducted but only for secondary school and college students.

These tests will be taken three times in school, and then twice a week to ensure the spread of COVID-19 is kept at a minimum.

Secondary school students are not required but are ‘strongly recommended’ to wear face coverings in areas where social distancing is not possible. This is not mandatory due to students possibly feeling “anxious and nervous” about wearing them, Ms Ford said.

“Back to school has its pros and cons” she said. “It was hard homeschooling all my children, especially since they are all in different years.” “I know they are happy to go back and see their friends, but it is still scary with coronavirus right now.”

Professor Calum Semple, who sits on the Scientific Advisory Group for Emergencies, said the impact on case numbers after classrooms opening up is a “worry”.

This is following the rise of cases the previous time that the prime minister instructed all students to go back to school.

When asked about testing, Kelly responds “I personally do not agree with it. I don’t want my son being tested twice a week. It is uncomfortable and nerve wracking (for him).”

On Sunday the education secretary suggested longer school days and shorter holidays because of the amount of education students have been missing out on in lockdown and home learning.

“I don’t think it is fair on them” Kelly says, in regard to the proposal of longer school hours. “Giving hardworking students less holidays because of something that is not their fault is ridiculous.”

“They just won’t focus if they have to attend school even longer than the 5 whole days a week”.

A primary school in Manchester ran after-school catchup sessions for some students during the autumn term. Teachers found that students, especially the younger ones, were too tired for the sessions to be effective.

A survey from the Institute for Fiscal Studies found that nine in ten parents said they would send their children back to school if it were not compulsory.

“I probably would send my kids back if it wasn’t compulsory” she said.

“My youngest is two, so I’m starting to look for work now. Sending my kids back to school really helps with that. Plus, they have been stuck inside for far too long now. They need school and friendships to develop.”

A study by researchers at the universities of Essex, Surrey and Birmingham reports a decline in students’ mental health during lockdown.