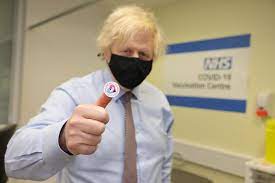 One of the nurses who cared for Boris Johnson when he was hospitalised with coronavirus has resigned due to the “lack of respect” the government are showing towards NHS workers during the pandemic.

Jenny McGee, who cared for the prime minister, has left the NHS over the suggested 1% pay rise for health workers. Health unions have described the move as a “kick in the teeth” after efforts during the pandemic. In a Channel 4 Documentary ‘the year Britain stopped’,which will be aired later this month, Ms McGee said her comments and they have been reported by the Guardian, she said, “We’re not getting the respect and now pay that we deserve. I’m just sick of it. So I’ve handed in my resignation.”

The Prime Minister previously praised to the media, lead intensive care nurse Jenny McGee along with colleague Luis Pitarma for caring for him during his hospital stay.

On top of calling out the government’s attitude towards key workers and NHS staff, Ms McGee said the photograph of her at Downing street gardens was the PM’s staff co-opting her into a “clap for the NHS” photo opportunity, when she really believed it was a small ‘thank you’ visit.

Boris Johnson said in a video on Twitter that he had witnessed the “personal courage” of hospital staff on the front line. In March 2021, he defended plans to increase NHS workers’ pay by just 1 per cent by saying the government was giving “as much as we can”

Ms McGee describes the strains the NHS has been under, particularly in the run up to Christmas 2020 when the Government was holding out mounting pressure to inflict restrictions to stop the spread of Covid-19.

On Tuesday, Ms McGee released a statement through Guy’s and St Thomas’s NHS foundation trust. She had said: “After the toughest year of my nursing career, I’m taking a step back from the NHS but hope to return in the future.

“I’m excited to start a nursing contract in the Caribbean, before a holiday back home in New Zealand later in the year.

“I’m so proud to have worked at St Thomas’ hospital and to have been part of such a fantastic team.”