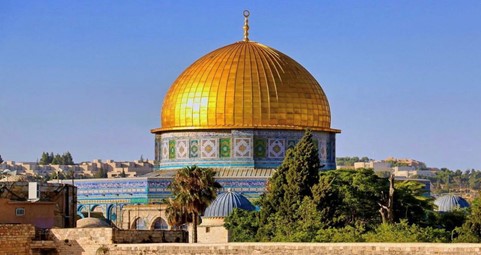 Tension has risen across occupied East Jerusalem, the West Bank and Gaza during the Muslim holy month of Ramadan, amid growing anger of evicting Palestinians from their homes on land forcefully being claimed by Jewish settlers. In an earlier warning to Israel to stop violence against Palestinian worshipers at Al-Aqsa Mosque in Jerusalem, Hamas launched dozens of rockets from Gaza into Israeli territory. More than 1,000 rockets have now been launched by Palestinian militants over the last 38 hours, which is making the UN fear a “full-scale war”. Hamas’ leaders issued an ultimatum after days of violence against Palestinians, demanding that Israel stand down its security forces from the Al-Aqsa Mosque compound in East Jerusalem. Amnesty International UK has reported: “Israeli forces have carried out unprovoked attacks on peaceful demonstrators in Sheikh Jarrah.”

“Israel must not be allowed to continue its rampage against Palestinians who are simply defending their right to exist and protesting against their forced displacement,” the group’s Middle East Deputy Director, Saleh Higazi, said.  136 people were hurt at al-Aqsa, 83 of whom were hospitalized, according to the Palestinian Red Crescent emergency service.

One of the rockets launched by Hamas in retaliation hit an Israeli household near the Jerusalem outskirts, but one Israeli civilian was slightly injured after his car was hit by an anti-tank missile near the Gaza border. The streets of Gaza are full of rubble from countless buildings and cars being destroyed or burned. Hamas had crossed a “red line” with its most recent volley, now nearly 50 rockets, prime minister Benjamin Netanyahu said, warning that this bout of fighting could “continue for some time”.

“We will not tolerate an attack on our territory, our capital, our citizens and soldiers,” Netanyahu said on Monday evening that whoever attacks Israel will pay a heavy price. However, according to the health ministry in Gaza, more than 32 people had been killed, including 10 children, and 220 injuries due to the airstrikes from Israel. The fires had been escalated after two tower blocks of residential homes were destroyed by rocket launches targeting them.

Sky News reporter Mark Stone reported that the Israeli soldiers are “bluntly controlling a crowd that doesn’t need any controlling.”

Videos circulating online show worshipers throwing shoes and rocks at police who fired stun grenades and rubber-coated bullets to disperse them. The al-Qasaam Brigades have said that Israel has overstepped their boundaries and it is their duty to respond to Israel. Hamas leader Ismail Haniyeh said in a statement to Al Jazeera that the rocket attacks will continue until Israel ends all acts of “terrorism and aggression in Jerusalem and Al-Aqsa Mosque.”