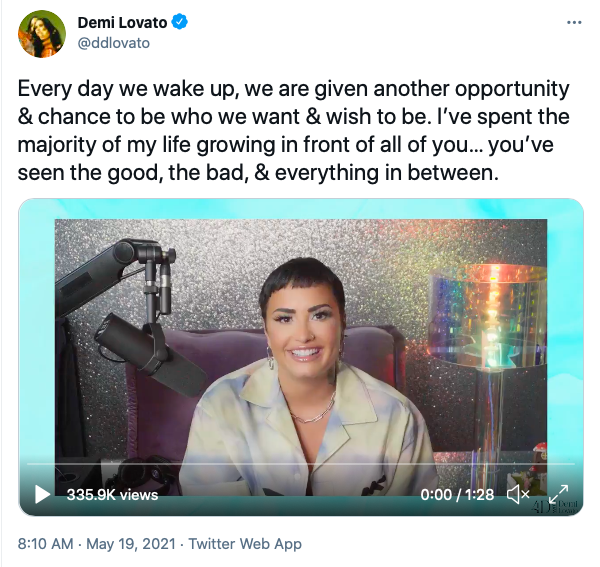 Demi Lovato has announced that they are non-binary and are changing their pronouns to ‘they/them’. The Disney Channel star took to Twitter to reveal that they are now identifying as non-binary after a “lot of healing and self-reflective work” over the past year and a half.

They tweeted “Every day we wake up, we are given another opportunity & chance to be who we want & wish to be. I’ve spent the majority of my life growing in front of all of you… you’ve seen the good, the bad, & everything in between.” With a video attached of the singer talking about their new identification.

Non-binary people feel as if they don’t specifically fit into the gender binaries of being either a man or a woman.

Although, non-binary identities vary and some may reject the binary of being a man or woman, others may feel that they can identify with certain aspects of it.

In the attached video, Lovato sits on a sofa and tells the world “I am proud to let you know that I identify as non-binary and will officially be changing my pronouns to they/them moving forward”.

The tweet received supportive replies from their fans, letting Lovato know they are proud of them, and that they are an inspiration to others.

Oscar Raymundo replied, “Demi! Your honesty will help so many people live their authentic truths. Proud of you”.

“I’m doing this for those out there that haven’t been able to share who they truly are with their loved ones. Please keep living in your truths and know I am sending so much love your way.” Lovato shares in the video.

This follows Lovato bravely sharing their personal struggles in regards to their mental health and addictions in a YouTube documentary, which premiered earlier this year.

They revealed that doctors said they had “five to 10 more minutes” after a near-fatal overdose in 2018.