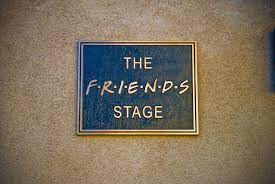 The One Where The Fans Can’t Wait

It has been 18 years since ‘The Last One’ aired, and Rachel got off the plane to be with Ross; the cast of ‘Friends’ announced on 14 May that ‘Friends: The Reunion’ would be hitting the screens on 27 May, after a much anticipated wait since the first rumour circulated in February.

The episode titled ‘The One Where They Get Back Together’ has a star-studded guestlist; joining the cast on the famous orange sofa, will be previous characters from the hit show such as Aniston’s on screen sister Reese Witherspoon.

The news was released when Anniston, Cox, Kudrow, Schwimmer, LeBlanc and Perry all posted a short clip to their Instagram accounts of the cast walking arm in arm away from the camera.

‘The One Where They Get Back Together’ will be watched by millions on HBO Max in the US and is still to be confirmed where it can be watched here in the UK. Nostalgic fans can’t wait to see their best ‘Friends’ back on the screen.

Many fans rejoiced in the news with some fans saying ‘It feels like coming home’, others were left disappointed when HBO Max released a statement which said, “we want to make it very clear that this is not a new, original episode of the series. The cast will be appearing as themselves, not as their beloved characters.”

Many people have already criticized the show for its lack of diverse representation as Mindy Kaling, K-pop sensation BTS and activist Malala Yousafzai are the only people of colour to appear.

The show has been known to face backlash in recent years for the noticeably all white cast and have been criticised for not showing an inclusive and realistic group of ‘Friends’ in New York, the show has also been known to for a few of the outdated sexist jokes that wouldn’t sit well in today’s society.

Fans took to Twitter as @WillBchillin said, “and people wonder why I say Friends is too white for me. Cant even get a black person for the reunion show.”

Others such as @IAmTHREATacular tweeted, “@FriendsTV it’s been 17 years & y’all still haven’t made any black friends? Lol smh. #FRIENDSREUNION and not a single black person. I knew all that talk about diversity was lip service. Count me out @hbomax” Some twitter users are suggesting other people to feature in the reunion such as Selena Gomez, Julia Roberts, Danny Devito and Paul Rudd to replace some of the guest stars whereas lots of people are excited to see the invited guests.

The show will air on Thursday, May 27th on HBO Max in the United States. Although not confirmed, it is likely that SKY will be sharing the show for UK watchers.

You can watch the trailer here:

Could last nights brit awards be a teaser of what to expect on June 21st?
Eurovision semi-finals to go ahead tonight