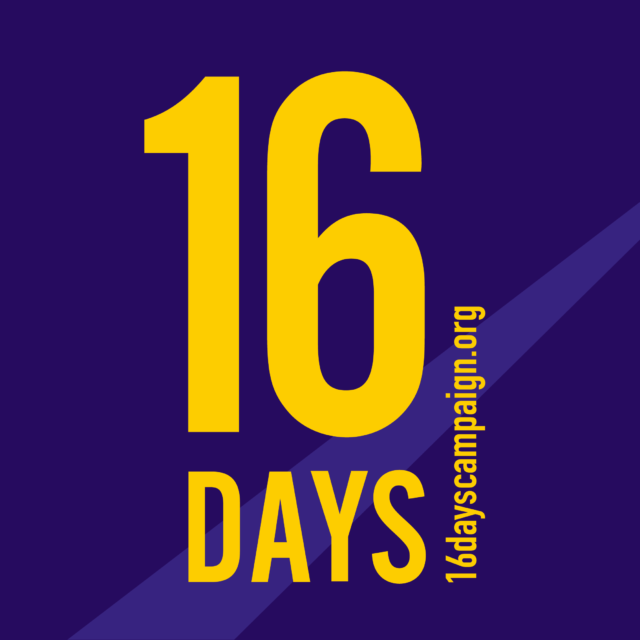 Leading the change against gender-based violence since 30 years : 16 days of activism for women around the world

This year marks the 30th anniversary of the Global 16 Days Campaign which runs out every year from the 25th of November to the 10th of December calling for the elimination of Gender-based violence worldwide.

The campaign, started in 1991, by the Center for Women’s Global Leadership aims to bring long-term change for women worldwide to create a strategy for groups to call for the elimination of gender-based violence and more than 6000 organizations have taken part in the 16 days campaign during the last 30 years.

“We want campaigners to initiate community conversations and events everywhere at local, regional, national and global levels to raise awareness and also demand action and accountability from governments , we’re also calling the campaigners to use our resources actively beyond the 16 days of the campaign.” said Ardra Manasi, the Global 16 Days Campaign manager.

This year is particularly focused on “domestic violence and how it impacts victims and survivors in workplaces”, in line with the multi-year theme of ending gender-based violence in the world of work, explored by the Centre for Women’s Global Leadership, every year since 2018 under different angles, as well as on “the issue of ending femicide” as announced on the campaign’s website, as its 30th anniversary theme. The decision to focus on those issues falls under the same motives, their recorded increase due to the COVID-19 pandemic and an urgent call for ground-breaking change to the world.

According to 2021 estimates from the World Health Organization (WHO), almost one third (27%) of women aged 15-49 years worldwide have experienced some form of violence, whether physical, psychological, sexual, emotional, or economic harm, at the hands of their partner. These violences are linked to the ‘world of work’ in many ways according to the Centre for Women’s Global Leadership, for example by losing their job due to being absent from work often pushing them into more economic dependence.

Ardra Manasi, the Campaign Manager, explained that the Campaign is specifically calling for the ratification by more countries of the International Labour Organization(ILO) Convention 190 (C190) on Violence and Harassment adopted in 2019. ILO C190 requires governments to not only recognize the impact of domestic violence in the world of work in its many forms but also to have to take more measures to mitigate the impacts and help victims and survivors. They would also like to highlight the promising practices that governments, companies and trade unions have made so far such as Philippines establishing a 10-day paid leave for victims of domestic violence. “The ILO C190 is the first international treaty to address violence and harassment in the world of work, we want to call on countries to ratify this Convention and we’re hoping that more will follow soon. Nine countries have ratified it so far,” she said. According to recommendation R206 (ILO R206) that support the Convention, some measures to be taken in order to mitigate the impacts of domestic violence include :

· leave for victims of domestic violence

A referral system to public mitigation measures for domestic violence, where they exist

· Awareness-raising about the effects of domestic violence.

The recommendation also proposes measures to support victims and survivors such as support to help them re-enter the labour market, specialized police units, crisis centres and medical care.

The campaign also decided to focus on femicide as its 30th anniversary theme due to the urgency linked with the Covid-19 pandemic, which is defined according to the South Africa’s Femicide Watch, “femicide is the killing of a female, or perceived female person on the basis of gender identity, whether committed within the domestic relationship, interpersonal relationship or by any other person, or whether perpetrated or tolerated by the State or its agents, and private sources.”

The Covid-19 pandemic forcing us to lockdowns and isolation contributed to increase femicides and gender-based violence with for example less opportunity for victims to get away from their abusers, often intimate partners, and seek help. In Brazil, reports of domestic violence have increased by 50%, while Argentina has seen a 25% increase. Cyprus has reported a 30% increase in domestic violence and reports in Singapore are 35% higher.

For Ardra Manasi “the States are not doing enough to prevent, investigate and punish femicides” she also explained that “there has been increasing State violence against growing public protests against femicides” were another motive to choose this theme.”

A range of recommendations to act effectively against gender-related killings of women have been proposed by UN Women, the UN Office on Drugs and Crime, the Office of the High Commissioner for Human Rights and the UN Population Fund such as :

The UNODC also recommends that countries implement the International Classification of Crime for Statistical Purposes (ICCS) which can help “develop a standardized and sustainable way of recording the gender— based dimension of all offences […] built on a set of behaviours and not legal definitions enshrined in criminal codes, as the latter differ across countries.

With more than 6000 of organizations over 185 countries that have taken part in the 16 days of activism since the launch in 1991, the campaign has an international reach. “In line with our multi-year theme and focus on ILO C190, we have been working closely with many global, national and grassroots organizations that work with informal women workers. Also, in March 2021, we launched a national campaign in Nepal, in partnership with the Forum for Women, Law and Development to demand the ratification of ILO C190 by the government.”

After 30 years of activism, it was particularly important for the organization to highlight success stories and prove that significant change can be brought to those