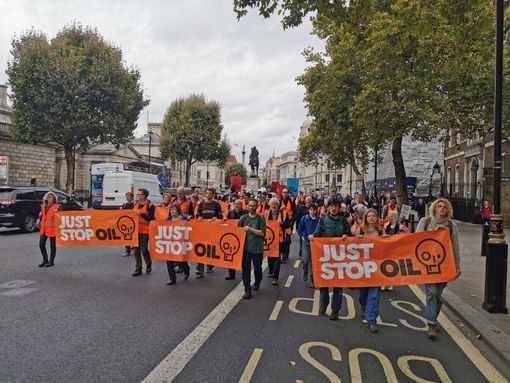 There has recently been a major oil strike which has taken place this month with activists from the organisation Just Stop Oil partaking in protests every day this month at 11AM at Westminster. the protests have been able to block traffic routes onto Parliament Square just after 12:00 this afternoon. The Metropolitan Police confirmed that there were around 54 arrests of activists on the day of the protests with it being said that the those arrests have been taken to several different police stations were they were to remain until the roads re-opened at around 2:30PM when they were still behind bars. The group called “Just Stop Oil” later stated on their website that “Our supporters will be returning today tomorrow and the next day and the next day after that and every day until our demand is met no new oil and gas in the UK. We will not stand by while everything we know and love is wilfully destroyed. We do this because it is the right thing to do and so we have a duty, a responsibility to continue.”

Oil hasn’t been stopped yet, so surprise surprise, we are back. The disruption will end when the Government halgs all future licensing and consents for the exploration, development and production of fossil fuels in the UK. pic.twitter.com/ENSBQDzfXi

The group had blocked several traffic routes just after 12:00PM during the afternoon with five individuals gluing themselves to the ground blocking traffic routes onto Parliament Square. The protesters had gotten together at four separate bridges leading onto Westminster, with these bridges being Waterloo, Westminster, Lambeth, and Vauxhall. However, the police were able to re-open access routes to Parliament Square at approximately 2:30PM without much difficulty. The demonstration had originally been held due to plans by North Sea Transition Authority having hopes to launch more rounds of oil and gas licensing this month.

The group in general are opposed to any new investment in fossil fuels which they see as damaging with the organization stating on their Twitter site that both oil and gas proving damaging to millions of people as well as causing mass poverty. They group added that they will not stop until the UK government stops all new oil and licensing. One of the protestors explained in an interview that the government was ignoring the climate crisis stating that it was a death sentence for millions of people both globally and in the UK. The activists from the organization had vowed to continue blocking streets in Westminster everyday until the incumbent government agrees to bring to an end all new oil and gas projects with the recent arrests bringing the total amount since last Sunday to 100.