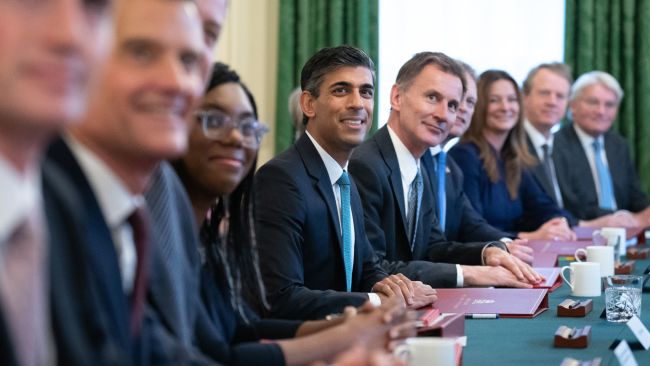 Rishi Sunak appointed his first cabinet after his appointment as Prime Minister on Monday. Sunak sacked much of the previous cabinet of his predecessor Liz Truss with figures such as Chloe Smith, Kit Malthouse, Wendy Morton, Jake Berry, Simon Clarke, and Vicky Ford all departing. Many of Rishi Sunak’s allies have either been bought into the cabinet or have retained their places. Several outgoing cabinet ministers such as Jacob Rees-Mogg, Robert Buckland and Brandon Lewis all resigned with them likely not to keep their jobs had they stayed. Rees-Mogg had originally criticised Sunak during the Conservative Party summer leadership election for being a socialist and not a Conservative. Jeremy Hunt has been kept in the same job as Chancellor of the Exchequer following the initial appointment by previous prime minster. The incomers into the cabinet include ministers who had served until the summer including Dominic Raab in his previous role as Deputy Prime Minister, Michael Gove in his old role as Levelling up Secretary and Oliver Dowden as Chancellor of the Duchy of Lancaster.

The Prime Minister also promoted Steve Barclay back into the cabinet following his sacking by Liz Truss with his appointment as Health Secretary as well as ally Mel Stride as Work and Pensions Secretary and newcomer David TC Davies as the new Welsh Secretary. Leadership rival Penny Mordaunt has been retained in the cabinet in her role as Leader of the House of Commons and Lord President of the Council. Gillian Keegan is another newcomer to the cabinet having served as a junior minister in the department she is now heading as Education Secretary and Kemi Badenoch has been retained as International Trade Secretary. However, the most controversial appointment is Suella Braverman who was re-appointed as Home Secretary after her dismissal from the same role only six days earlier for allegedly breaking the ministerial code as well as for controversial comments made in the same role.

Shadow education secretary says the public has not had "straight answers" over why Suella Braverman MP had to resign as home secretary last week – she was reappointed by Rishi Sunak yesterday.

The new cabinet in full include:

Jeremy Hunt – Chancellor of the Exchequer

Oliver Dowden – Chancellor of the Duchy of Lancaster

Lord True – Leader of the House of Lords