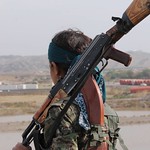 Shamima Begum – one of three east London schoolgirls who travelled to Syria to join so-called Islamic State – has lost the first stage of a legal challenge against the decision to revoke her British citizenship.

She had it removed a year ago, after travelling from east London to Syria to join the terror group in 2015. Her lawyers argue that was unlawful – as she’s now been left stateless, but a tribunal’s disagreed.

In October last year, as Begum’s lawyers said she had professed sympathy for the Islamic State group in media interviews just to protect herself and her son, who latter died in the refugee camp.

And under international law, it is illegal to deprive nationals of citizenship. Doing this would leave them stateless.

Continue Reading
You may also like...
Related Topics:citizenship, Shamima Begum