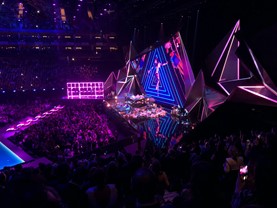 The Brit Awards make history with a number of record breaking wins.

The Brits returned last night as another non-socially distanced event.

It is safe to say women made history at 2021’s Brit awards, with six out of seven winners in the mixed gender categories identifying as women.

Pop group, Little Mix, won the British Group Award, and were the first all female band to do so, following on from the likes of Five Star, Stereo MCs and Gorillaz who were the only other bands that featured women in the award. Leigh-Anne Pinnock said “It’s not easy being a female in the UK pop industry,” when receiving the award. Dua Lipa, British pop artist, took home 2 out of her six nominated awards.

She took the stage with a strong acceptance speech. She stated “It’s very good to clap for (key workers), but we need to pay them,” When collecting her award for best female solo artist. Lipa dedicated her award as female solo artist to Dame Elizabeth Anionwu, the professor of nursing at the University of West London. She dedicated her second award, best album, to Folajimi Olubunmi-Adewole – a young man who heroically died after jumping into the River Thames to save a woman.

The indie band, Haim, made up of three sisters, won international group. This again set a record after the last female band to win this award were Destiny’s Child in 2002. Este Haim, the oldest Haim sister, was seen to be nearly in tears when receiving the award. Billie Eilish won international female award, making this her third award just in 2021. Swift says in her inspiring speech “If you’re met with resistance, that probably means you’re doing something new.” Arlo Parks won breakthrough artist, after being nominated for three awards and performing at the event.

Closing the event was an emotional performance with Rag’n’Bone Man, P!nk and the Lewisham and Greenwich NHS Choir.

Weight loss supplements and their potential danger on young consumers
Could last nights brit awards be a teaser of what to expect on June 21st?