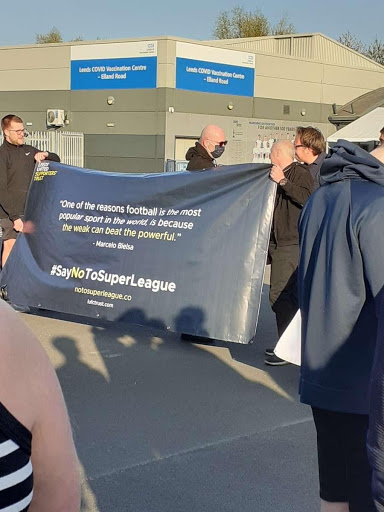 The fans’ passion breaks through the proposed European Super League as the big six pull out.

Just 48 hours after a proposed Super League was announced, the plans have already fallen through.

Liverpool, Manchester City, Manchester United, Chelsea, Arsenal and Tottenham Hotspur were the six English teams to sign up to the proposed super league. They would be joining clubs like Barcelona, Real Madrid and Juventus along with others, in a competition.

English fans quickly grouped together and protested, the first protest happening at Elland Road, as Leeds hosted Liverpool, one of the six English teams to sign up to this league.

Adam White, a Liverpool fan currently studying at Leeds University, attended the protest, in an attempt to express his anger towards the Super League. “I know football has been slowly becoming more commercial all the time, but this felt like it broke it into new extremes.”

Adam continued to say that he felt sorry for the older generation: “those fans who have given everything to travel across Europe, to watch Liverpool play when they earnt the right to, this new competition would mean those memories and trophies earnt would amount to nothing.” The fans at Elland Road were not the only fans to protest, with similar events being seen outside Stamford Bridge for their premier league clash with Brighton, and also outside the Tottenham Hotspur stadium as Tottenham hosted Southampton.

The protests against the Super League went further than just challenging the fact that the clubs have broken Premier League protocol, but to criticise what the fans deemed as corruption and greed.

Adam White said that “Liverpool is a working-class city, the true fans here work week-in, week-out to be able to afford to go watch the team they love on Saturdays. The price for a European game can be hard for some to afford, and having to fork out trips to Europe every week just won’t be viable for the fans.

The fans were not the only ones to protest against the proposed Super League:

Petr Cech was seen outside Stamford Bridge protesting with the fans, and many footballers have expressed their opinions on social media.

Liverpool captain and England international Jordan Henderson rallied together with the Liverpool squad, and announced their commitment to the football club and the supporters, opposing a Super League.

Lower league clubs have used the announcement and backlash in an attempt to bring fans back to local football.

Grimsby Town FC announced a football shirt amnesty, where if you handed in a shirt from one of the big six, you would receive a Grimsby shirt of your choice in return. Grimsby announced than any shirts received would be sent as charity donations to local youth groups and humanitarian projects in Africa.

Perez believes that his plan for a super league will save football, also stating that 16–24-year-olds are not interested in football anymore. He further went on to say that each of the clubs who have announced that they are leaving the competition are still actually part of it, as none of them have paid the fine for leaving.

Fans across the country are now torn as to whether any punishment should be handed out. In a small survey conducted on twitter, 72% of voters believed that the clubs should be punished for attempting to breakaway into an elite competition.

A large number of supporters (mainly those who support the big six) have suggested that it is unfair to punish the clubs, as this will affect the players and the fans who had nothing to do with the decision.

Thomas Graves, a Norwich City season ticket holder, believes that a 15-point deduction, European ban and fines in excess of £20 million would be suitable, he continued that “if this super league happens, then I don’t want Norwich to be a part of the premier league”.

We now wait for the Premier League and FA to announce their decisions about the top six, and also to see how the top six begin to make this right with their fans.

What are your thoughts on the recent events, would you punish the clubs or would you just let this be a lesson learnt? Get in touch with us at @journalism_lond on twitter and tell us what you think!

Continue Reading
You may also like...
Related Topics:football, super league

India in Crisis: COVID Cases Rising Daily and an Oxygen Shortage
Out of Home- New exhibition in London shows what it is like to be homeless during the pandemic.