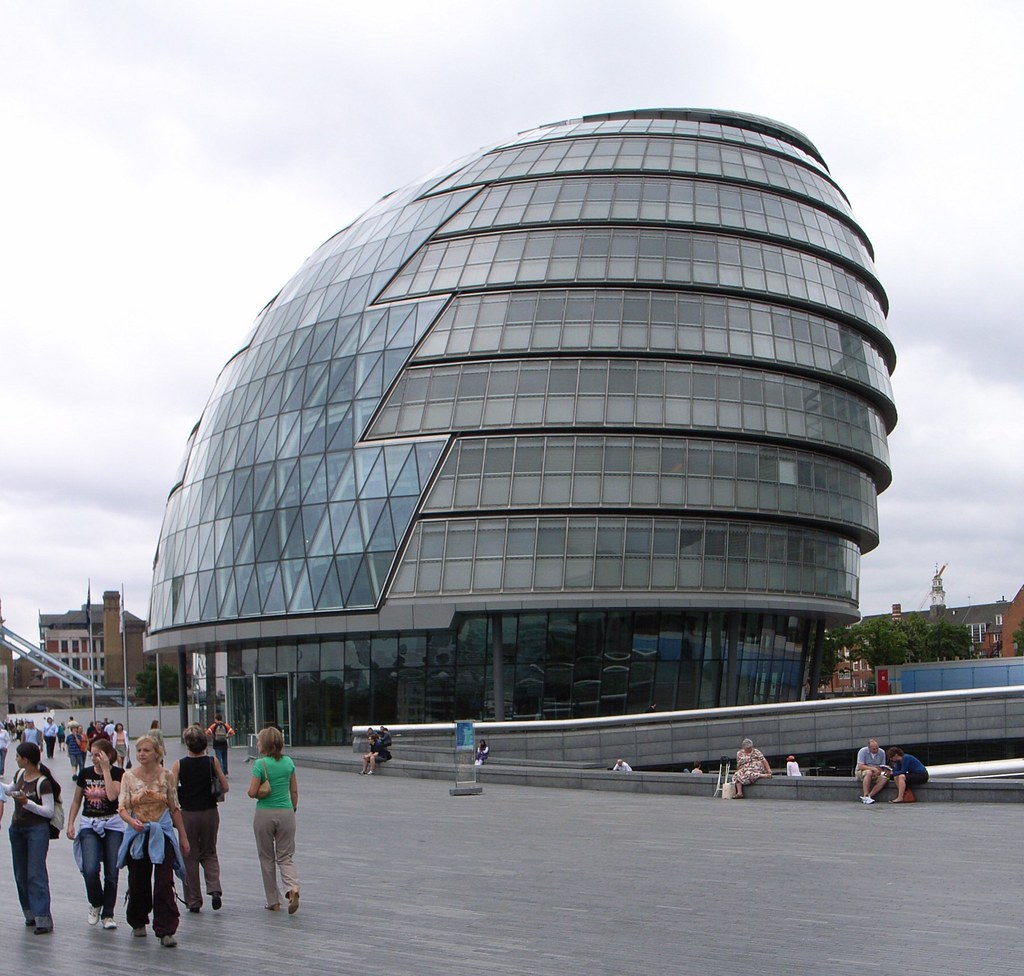 City Hall is one of ten notable buildings created in the last century to be included in an architectural campaigning charity’s list of ‘at risk’ buildings.

City Hall is the headquarters of the Greater London Authority (GLA), which consists of  the Mayor of London and the London Assembly. It is located in Southwark, on the south bank of the River Thames near Tower Bridge. It was designed by Norman Foster and opened in July 2002. The Twentieth Century Society, has named 19-year-old City Hall as one of the top 10 endangered buildings of historical and architectural importance in its 2021 ‘buildings at risk’ list.
City hall is joins other threatened modern buildings such as Swindon’s Oasis leisure centre, the Brutalist Derby Assembly Rooms,  Cressingham Gardens in south London,  Halifax’s swimming pool and murals and the Bull Yard in Coventry.
The City Hall building was only completed in 2002 but faces an uncertain future after its first and only tenant, the Greater London Authority (GLA), announced plans to move to the Royal Docks later this year.
The Mayor of London, Sadiq Khan, had confirmed the move back in November that the Greater London Authority (GLA) will leave its current City Hall home and move its headquarters to The Crystal building in the Royal Docks. Khan said when confirming the move in November last year: “I know that City Hall is a landmark building for many – but as Mayor I will always focus my severely limited budget resources on front-line public services and supporting Londoners and our recovery from this pandemic, rather than on high City Hall building costs”.
The move is encouraged as it is said the change will apparently save the GLA Group £61m over five years and £126m over ten years. The Mayor says the move is unavoidable because the Government is not adequately funding local and regional government in London, including the costs caused by of the Covid-19 pandemic.
While City Hall contains office space, much of the building is dedicated to a central debating chamber surrounded by a celebrated helical staircase. Due to this unique design and purpose the building owner, Kuwaiti-owned St Martins Property Group, may struggle to find a new occupier. The Twentieth Century Society’s application to get City Hall Grade II*-listed was rejected by Historic England, their reasoning was that the GLA’s departure did mean that there is a serious threat of demolition.
Historic England also said it was unsure whether or not City Hall had strong potential for inclusion on the National Heritage List for England, according to the Twentieth Century Society.
The Twentieth Century Society is now requesting for the listing process to be reviewed and call the decision ‘ridiculous’.
If City Hall were listed, it would become the youngest building on the National Heritage List and the first completed in the 21st century.
The future of the historic building City Hall is still uncertain.
However, there are currently no public plans to redevelop or demolish the City hall building.
https://youtu.be/5wq2BqYsMXY
By Asha AHMED